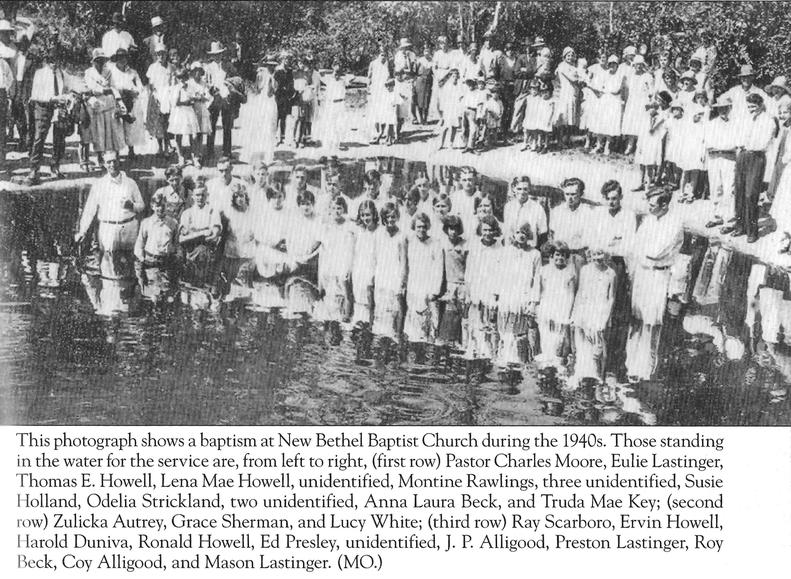 A PLACE OF GRACE

Our church  has a rich and lively history in service to our Lord at its location on the Lower Meigs Road.  In 1905, two farmers,  G.E. Autrey and J.W.  Cooper, followed the Lord’s leading to create a place to worship for their community.  Mr. Cooper gave the land to build a brush arbor near a grove of old oak trees and the members of the new church chose the name “Bethel”  meaning “house of God.” They soon built a one-room church to house the growing congregation. A decade later, our church was reorganized and became New Bethel in 1915. We joined the Colquitt County Baptist Association in 1921. The church grounds incorporated a school in the early years, and a cemetery was created.

Over the years, pastors have included farmers, school teachers, and seminary students. Of particular note is James C. Moore (pictured above) who wrote the popular hymn  Where We'll Never Grow Old.  Additions and renovations were made to the church building over the years, and by 1954 the Sunday school/social hall annex was complete. On the 50th anniversary of the church, in October, 1955, New Bethel hosted the 44th annual meeting of the Colquitt County Baptist Association. In 1994, New Bethel purchased the campground behind our church from the Association, and it became the New Bethel Fellowship Park. Our church celebrated its 100th anniversary in 2005 under the pastoral leadership of Bro. Dion Brown.

Rooted in our strong heritage, we continue to serve the Lord in our community. Over the years, our Vacation Bible School has grown into one of our main outreach ministries and is well attended every year.  Gospel preaching, Bible study, and missions remain central in our purpose to glorify God.